I recently saw a patient with digital ischemia who got improvement in both pain and tissue viability with transdermal oxygen from the OxyBand dressing. There are a lot of possible reasons for digital ischemia, so it’s important to know why the patient has ischemic fingers. I can’t do justice to the topic here and don’t want to pretend that I have a lot of expertise other than seeing a lot of these. However, you can’t treat a patient effectively until you have determined whether it’s due to the flare of an autoimmune disease that needs controlling, whether spasm is the primary issue, whether the problem is rheologic, whether they have vascular disease, Burger’s or some combination of the above. Stopping smoking is a given, assuming you can make that happen. With the caveat that this is a huge topic, I wanted to do poor justice to it because I thought I’d mention a basic toolkit that I use, and the fact that, to my surprise, the OxyBand transcutaneous oxygen dressing gave the patient considerable relief of pain and visible improvement.
I was asked to see the patient because he was waiting for is insurance to authorize hyperbaric oxygen therapy, a process which took several days and during which time his left middle finger went over the edge and it was too late to save the distal tip. That’s why I thought it would be good to talk about an emergency toolkit since it’s getting harder to get HBOT for anyone.
The patient in these photos has CREST, also known as limited scleroderma. CREST is an acronym for the clinical features that are seen in a patient with this disease, specifically:
(C) – Calcinosis: calcium deposits in the connective tissues
(R) – Raynaud’s phenomenon: where the hands and feet turn white and cold and then blue, and can even become ischemic (usually in response to cold but also to other factors)
(E) – Esophageal dysfunction resulting in swallowing difficulty
(S) – Sclerodactyly: thick and tight skin on the fingers, caused by an excess of collagen deposits within skin layers.
(T) – Telangiectasia: small red spots on the hands and face that are caused by the swelling of tiny blood vessels. 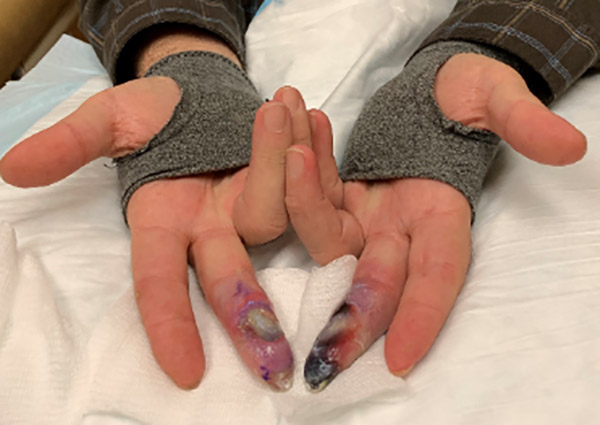 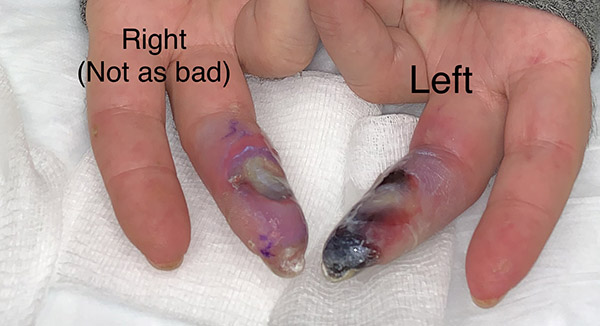 He got dramatic improvement in his digital ischemia with application of the OyxBand dressing. Perhaps the most striking feature is that he got a lot of pain relief from the dressing which seems important. It’s clear from the photos below that the left middle finger was in worse shape to start with. 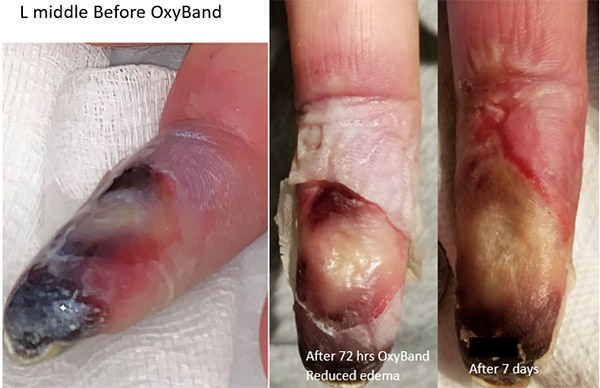 After 72 hours of the OxyBand, the edema of the finger is dramatically reduced and that’s what’s causing the skin to peel. In a week, the finger is beginning to demarcate. 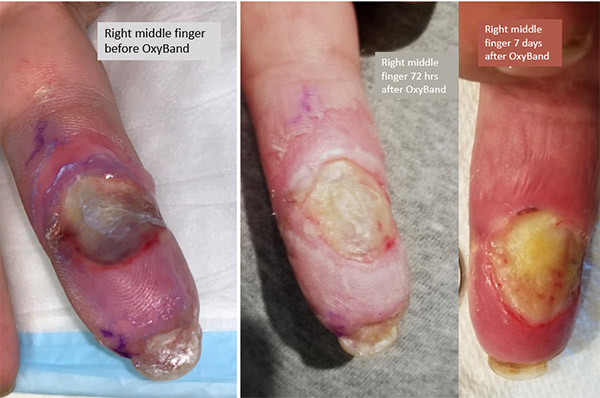 The improvement of the right middle finger was dramatic after 72 hours and after a week there may even be a few granulation tissue buds at the base of the ulcer.
Here is a movie of OxyBand being applied to the finger, from my YouTube channel:

This patient’s situation made me think about some issues that I think are deserving of comment.
Thankfully we normally only see one case like this a year. That means that a patient who has digital ischemia with threatened gangrene of the fingers has some serious problems that are not strictly medical, including:

I was asked to see the patient for a second opinion because they were waiting on authorization to start HBOT at a facility that was closer to their home. I should issue a disclaimer that I’m not a rheumatologist and have no special expertise in connective tissue diseases. However, I do have some rules that have stood me in good stead when it comes to patients with mixed connective tissue disease and ischemia:

Other Treatments That Can Vasodilate:

Hyperbaric Oxygen:
HBOT can raise tissue oxygen levels, but it actually causes vasoconstriction of the arteries. It doesn’t improve pain that much in my experience, even when it saves tissue.
The Nuclear Option for Digital Ischemia:

OxyBand Dressing:
I confess, I did not think this would work, but not only did transdermal oxygen improve the ischemia of the fingers, it dramatically reduced the pain.