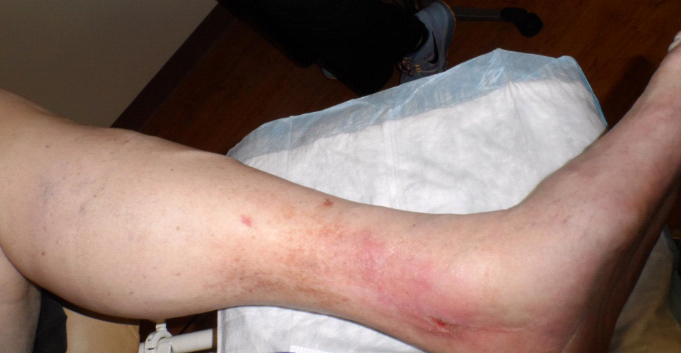 The following patients with leg ulcers were referred to me (sometimes by the vein center)  after undergoing venous ablation for documented venous reflux.

The first is a 92 year old, alert little lady referred from a local vein center.  A circumferential leg ulcer had been present for 4 years and she had undergone several venous ablation procedures with post procedure compression bandaging which caused her excruciating pain. She slept in a chair due to rest pain. On her first visit, I performed an arterial screen (a US Wound Registry quality measure).  Her skin perfusion pressure was only 18 mmHg (with 30-40 mmHg being the minimum value considered normal) and the pulse volume recording (PVR) on the foot was flat indicating that she had no pulsatile arterial flow to the foot. I admitted her to the hospital immediately, and the next morning, an invasive cardiologist stented an 85% occlusion of the right iliac artery.

The second patient was also referred from a vein center after undergoing several ablations. Each time they put a needle in him, he got a new ulcer. He has bilateral ulcers that look like this one, which of course, based on their fearful appearance, excruciating pain and pathergy, are due to pyoderma gangrenosum (the dark discoloration is a Pseudomonas colonization so severe it’s black rather than green).

The third case is a retired professional golfer with obvious venous edema and lipodermatosclerosis. He had undergone multiple ablation procedures but failed to heal this left medial ankle ulcer despite more than a year of aggressive compression. On his first visit I was concerned about the texture of his skin and on further questioning, he admitted he had undergone local radiation to the ankle more than 20 years prior. I performed a biopsy which revealed a basal cell cancer and he underwent a very large MOHs excision.

…and the final one is polyarteritis nodosa. To be fair, the woman with lymphoma had been advised to have venous ablation based on an abnormal Duplex Doppler, but hadn’t had it yet. The patient with arteritis had in fact, been treated with ablation.
(Good articles on inflammatory ulcers abound, but this one by Drs. Panuncialman and Falanga, “Unusual cases of cutaneous ulceration” is excellent.)
I have a large and growing collection of patients with vasculitis, lymphedema, arterial disease and other non-venous ulcers who have been referred to me after venous ablation. There is no doubt that they all had abnormal venous Duplex scans. However, with the single exception of the golfer whose history gave away his problem (but which needed to be confirmed by biopsy), an experienced wound care physician would have known instantly from these photos that the ulcers were not venous in origin. How?  There are well known criteria for diagnosing a venous ulcer based on patient history and the characteristic of the lesions. Wound care practitioners have been diagnosing venous ulcers clinically since the 1800’s, long before the advent of venous imaging or venous ablation.
Criteria for diagnosing a venous ulcer include the following (although not all criteria are required):

While it may be true that all of these patients have venous reflux disease, they don’t have venous ulcers. The first patient has lymphedema of the foot which resulted from constant dependency for her ischemic rest pain. However, the discoloration of her leg is not hemosiderin, but ischemic rubor which begins at the knee due to her very proximal arterial occlusion. The ulcers themselves are not the irregularly regular lesions of venous disease. The second patient’s bilateral lesions cannot be mistaken for venous ulcers since he has deep structures exposed and they are poorly demarcated and extend beyond the demarcation line of the plantar foot. The professional golfer has characteristic edema and lipodermatosclerosis, but the medial ankle ulcer is in an irradiated field on top of an old surgical scar, so it’s cancer until proven otherwise. The woman with T cell lymphoma has a poorly demarcated lesion that extends beyond the demarcation line. Despite his edema, the final patient with vasculitis has poorly demarcated ulcers with a purpuric border and he is in excruciating pain.
A recent paper we wrote about developing a way to stratify venous ulcers by severity was rejected, in part because the reviewers did not feel that wound center physicians could diagnose a venous ulcers based on clinical criteria and that only a venous expert can diagnosis a venous ulcer based on Duplex scanning. On the other hand, since all of these cases were diagnosed as venous by venous experts and underwent ablation, does that make them venous ulcers? Apparently it does.
Here is what the reviewers said when they rejected our paper:

“Many who work in a wound care center have little training or knowledge in how to identify a venous leg ulcer, as opposed to any ulcer… There is a tremendous amount of data in the paper, but the most important data is missing- the results of an initial duplex scan of the deep and superficial veins for valve reflux, and an ABI. These are the tests that should be done on the first visit to classify an ulcer as venous…  The authors appear to be developing an assessment system that will churn patients, spending huge $$ in wound care centers, and then referring the patient late to a venous specialist who addresses the problem, after the wound has been  initially managed by inexperienced wound care specialists. The alternative and better system is that a patient should initially be evaluated and treated by a vascular specialist before entering a wound care center, not after… The paper seems to be written by authors who have little expertise in venous ulcers.”

There’s no question when I look at photos from the US Wound Registry, a significant percentage of ulcers classified as “venous” are not venous based on the very simple criteria I described above. However, if it requires a venous Duplex to determine whether a wound is venous, in order to decide which patients to refer to a venous expert, then how are we supposed to know who to refer?
These cases demonstrate that the inability to use long-accepted clinical criteria to diagnose a venous ulcer is not unique to wound care practitioners. Apparently venous experts need some help with this, too. I would like to know if you think it is possible to diagnose a venous ulcer based on clinical criteria? According to the reviewers, if the ABI does not show arterial disease, and the venous Doppler DOES shows venous disease, we have ourselves a venous ulcer.  Since the reviewers agree that I am an inexperienced, so-called  specialist with little experience in treating venous ulcers, I should probably not vote on this issue. However, there must be some wound care practitioners who are not as hopeless as I am.  It is possible to diagnose a venous ulcer based on clinical criteria? If the venous Duplex shows venous disease, and the patient has a normal ABI, does that a venous ulcer make? Let’s vote!
Click here to respond to my Venous Ulcer Survey.
I think it is now time to get the dermatologists who are also care experts involved. We need to establish the clinical criteria that constitute a venous ulcer, or we need to agree that a venous ulcer can only be diagnosed by a venous interventalist after a Doppler evaluation demonstrates venous disease. It is true that venous ulcers can be diagnosed based on clinical criteria. And it is certainly true that all ulcers among patients with documented venous disease are not venous. I think I just proved that.