I Missed It! Ehlers-Danlos Syndrome as the Cause of Wound Healing Problems 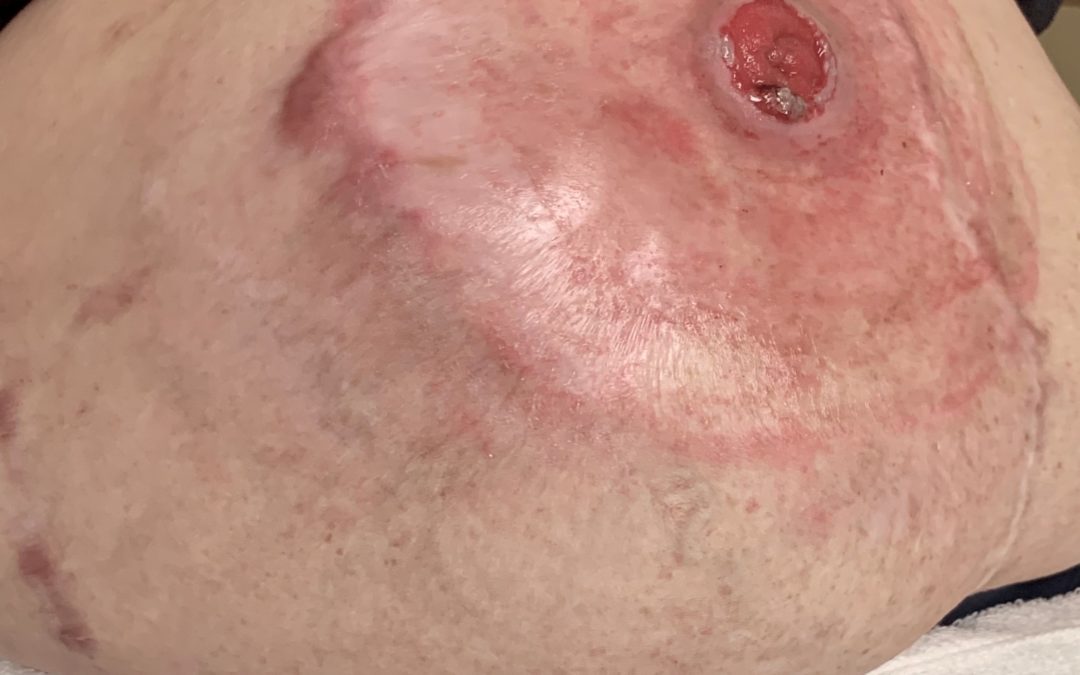 As any wound care practitioner knows, you can work your way through the Merck Manual of Rare Diseases every year because wounds are a SYMPTOM of disease. If there’s a rare condition, it will probably end up in the wound center. The question is whether we recognize it. I missed the fact this sweet lady has Ehlers-Danlos syndrome (EDS).  EDS is a group of related disorders caused by different genetic defects in collagen. Most of us remember this condition vaguely from medical school textbooks because, thanks to their extreme flexibility, it is the condition which allowed circus performers of yesterday to contort their body to an extreme degree.
My patient came to the wound center because of complications after abdominal surgery. She had undergone multiple abdominal operations and things always seemed to “fall apart.” Her ostomy kept having to be redone, and she had a massive abdominal hernia (see photo). Whenever a patient’s story is complicated, and you think to yourself, “WHY do they seem to have such bad luck?” then maybe we are missing something. And I was!
Reported estimates for the incidence of all EDS types range from 1/ 2,500 to 1/5,000 births. There are 13 subtypes of EDS each of which has specific clinical criteria, but the primary symptoms are joint hypermobility, skin hyperextensibility, and tissue fragility- which is of course why they have wound healing problems. There is a lot of symptom overlap with  other connective tissue disorders  so that can confuse the diagnosis. For example, she said her mother had rheumatoid arthritis – but I bet she didn’t. She probably had EDS. Classical EDS follows an autosomal dominant in heritance pattern, but some variants are recessive.
Hints about EDS include paper-like (papyraceous) scars which are discolored and stretch with time (see photos of her scars), frequent joint dislocation and degenerative joint disease which can be associated with chronic pain. Bowel disorders are common including functional dyspepsia (indigestion), irritable bowel syndrome and bowel rupture. They have autonomic nervous system issues and may experience orthostatic hypotension. The more serious complications of some subtypes are cardiac valvular problems (especially the mitral/bicuspid valve) which can lead to congestive heart failure, arterio-venous malformations and dilatation of the aorta with an increased risk of aortic dissection.
My patient likely has the Dermatosparaxis type (dEDS). Manifestations include short stature and short fingers, loose skin (see left photo below), and blue-tinged sclera (see right photo below). A major and common complication of dEDS is herniation after abdominal surgery, in part due to the lengthy wound-healing process (which of course she had). EDS patients are predisposed to wound healing problems. Surgical wounds require extra sutures and should be left in longer. Wound edges should be carefully approximated. Ascorbic acid (Vitamin C) may be recommended to help reduce easy bruising from vessel fragility.

I missed her skin hyperextensibility, parchment paper scars (see below) and faintly blue sclera, but in retrospect, it’s so obvious. I wonder how many others I have missed? She said she wanted me to post these photos because one of you reading this blog has a chronic wound patient with undiagnosed EDS.  I hope you will pass this one on.