Revisiting “Squanto and the Miracle of Thanksgiving” 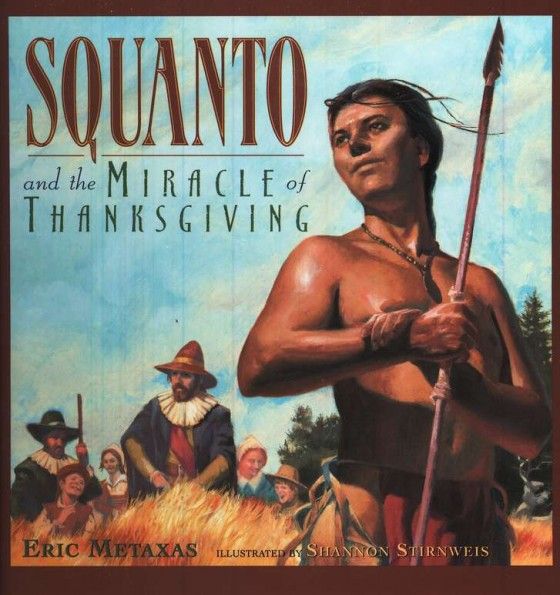 The Mayflower left the port of Southampton in August 1620 but was forced to put into Plymouth, England for repairs. The 102 passengers and 30 crew members finally left Plymouth for America on September 16, 1620. Blown off course by storms, it wasn’t until December 17th they reached a harbor which they aptly named Plymouth Harbor, and dropped anchor. On December 21st, the first of the Pilgrim Fathers set foot on what would become Plymouth settlement. Arriving just as winter set in meant that they were unable to build adequate shelter, and many of them died during that first winter. It’s well known that after that first terrible winter, a native Patuxet man known as Squanto arrived at the camp, a man without whose help they would not have survived another winter. But the story of how Squanto came to be there at just the right time is a tale that is stranger than fiction. Don’t stop reading.

Squanto was born in a Patuxet village, somewhere in the vicinity of present-day Plymouth, Massachusetts. In 1604, sixteen years before the Pilgrims arrived, Captain George Weymouth, who was exploring the New England coastline, captured Squanto and five members of his tribe and took them all back with him to England. He taught Squanto English and trained him as an interpreter. It took ten years for Squanto to finally make his way by ship back to New England, which he did in 1614 by accompanying an expedition led by Captain John Smith. However, just as he was finally making his way back to his people at Patuxet, he was kidnapped AGAIN. This time it was by Thomas Hunt, one of Smith’s lieutenants, who transported him right back across the Atlantic to Spain, where Hunt tried to sell him into slavery. Some local friars discovered what Hunt was attempting, so they rescued Squanto and the other Native Americans with him.

Squanto stayed with the friars for some time, where he learned about the faith of the friars. He eventually persuaded the friars to let him try to return home to New England once more. He got as far as London, where he lived with John Slany, a shipbuilder for whom he worked for a few years. Then, in 1619, Squanto finally returned to New England, once again aboard a ship captained by John Smith! However, when he at last arrived back at his village after being away 14 years (and kidnapped twice), he discovered that during his absence, his entire tribe, as well as the majority of the coastal New England tribes, had been wiped out by a plague, possibly smallpox. So that is how Squanto, now the last living member of his tribe, a believer in the same Christian God as the Pilgrims, having lived for many years in England, walked into the Pilgrim camp in 1620 where he found them in a sorry state, greeted the settlers in fluent English, and offered his assistance to them.

In addition to teaching the Pilgrims how to farm in the New World, Squanto became the translator and guide to the Pilgrims on diplomatic missions to the Wampanoag Indians which threatened the security of the settlement.  Later, when he was captured by the Wampanoag, Myles Standish led a ten-man team of settlers from Plymouth to rescue him.  He was found alive and welcomed back by the Pilgrims at Plymouth, his adopted “tribe,” where he continued his vital role to the colony. In 1622, on his way back from a meeting to repair damaged relations between the Wampanoag and Pilgrims, Squanto fell ill. Governor William Bradford recorded what happened: “Squanto fell ill of Indian fever. He begged the Governor to pray for him, that he might go to the Englishman’s God in heaven, and bequeathed several of his things to his English friends, as remembrances. His death was a great loss.” Thanks in large part to Squanto’s diplomatic efforts, peace between the Wampanoag and Pilgrims lasted for fifty years.

That is a life story you just can’t make up and when you hear it, it is no wonder that our Pilgrim Fathers believed unswervingly in the Providence of God and how life events which seem tragic at the time, can place you at the right place, at the right time, for a great purpose.

VIDEOS >  The Unlikely Hero of the First Thanksgiving
MOVIE >  Squanto: A Warrior’s Tale
BOOK > Squanto and the Miracle of Thanksgiving