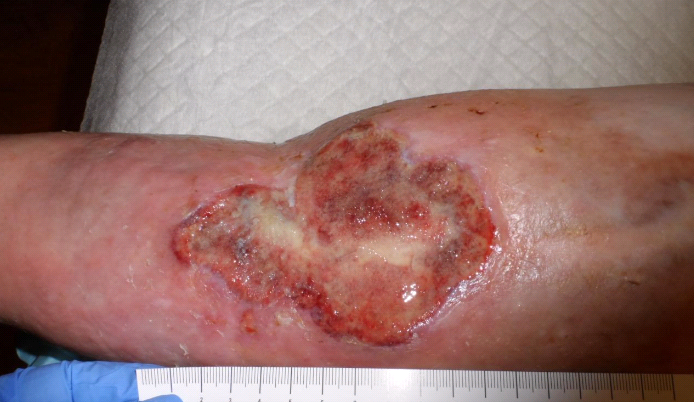 I am going to post a series of patients with confirmed or presumed pyoderma gangrenosum, most of who’s biopsy findings did not confirm the diagnosis. However, their response to a trial of prednisone was dramatic and the wounds closed with prednisone (or in some cases, Dapsone). In most patients, a trial of oral prednisone is a low risk intervention, once arterial disease, skin cancer and osteomyelitis have been ruled out. If the wound is inflammatory, the respose is rapid and obvious starting with an improvement in pain. The point of these is not to go through an exhaustive recap of the cases, but to help clinicians have some “pattern recognition,” and to understand that biopsies fail us more than half the time in chronic inflammatory ulcers.

48 yo man with mild mental retardation who had had an excruciatingly painful left anterior shin wound intermittently for over 20 years. It began after minor trauma in a Go-cart accident. The current wound (pictured above) had been present for at least a year but perhaps longer (history being somewhat unreliable). Arterial studies were normal. No improvement with compression bandaging x 3 weeks. X-rays negative for evidence of osteomyelitis and white count normal. Biopsy showed only a chronic ulcer but oral prednisone started because it appeared consistent with PG. Appearance after 3 weeks of Prednisone. The wound was no longer painful. Appearance after 12 weeks of Prednisone.