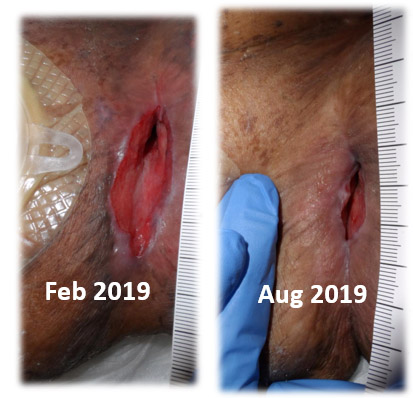 The photo above shows the un-encouraging 6-month course of a dehisced abdominal wound. There’s not much to show for all my hard work. Treatment with Negative Pressure Wound Therapy (NPWT) had absolutely no impact (and broke down the periwound skin), so we stopped. I know what’s wrong with her NOW,  but I didn’t know the diagnosis 9 months ago.

The history she related was that over the past 16 years she’s had four spontaneous ruptures of her colon (one while pregnant), three re-do operations for the inevitable ostomy, and multiple abdominal hernia operations, the most recent of which resulted in a dehiscence of the midline incision. It’s the abdominal wound that has been laughing at me for so many months. She’s been told she has rheumatoid arthritis, and the prednisone she had to take caused her to develop diabetes.  When I took this sad history I thought, “She must be the unluckiest person (still) alive.”

Her problems were not bad luck. It’s another case of Ehler Danlos Syndrome (EDS), which has been missed all these years. I only figured it out because a different patient took the time to return to tell me that she had been diagnosed with EDS after I missed it. Suddenly the spontaneous bowel ruptures, abdominal hernias and wound dehiscence(s) made sense. That was less than a year ago, and I have found two more EDS patients whose sad life stories are nearly identical.

Note her rubbery skin, which is far more flexible than the laxity associated with old age, and the characteristic parchment-like scars. How many cases of EDS have I have missed in 30 years if I have found 3 of this “very rare” condition in one year?